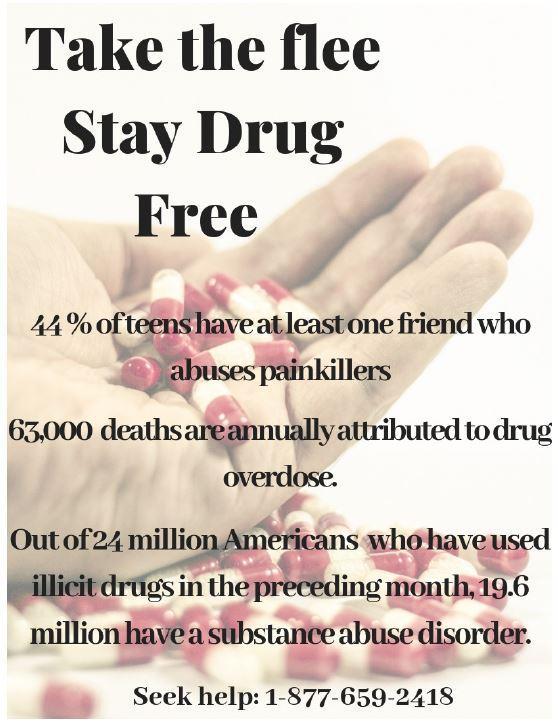 Don’t Be Snug with Drugs

68%—according to a study done by The Recovery Village, 68% of seniors in high school have tried alcohol. 35.1% have tried marijuana, and even 2.5% have been caught doing cocaine. These numbers are astounding and show how common drug usage in today’s society is. With a generation that thinks drugs are “cool,” it is becoming ever so clear that teenagers are becoming more susceptible to drug addiction every day. Nearly a quarter of high school students try illicit drugs, causing them to develop abnormalities, become depressed, and become academically unsuccessful. In fact, Just Think Twice states that high schoolers who use drugs even “have lower grades, a higher rate of absence from school and other activities, and an increased potential for dropping out of school.” This mainly occurs due to the brain interference that drug use causes, leading to a lack in focus and a drop in academic performance. Specifically in teenagers, drugs can ruin the brain while it is in its development stage. All in all, drugs can be detrimental to the success of a teenager, and they should not be taken lightly. Even doing drugs once can cause permanent damage to the brain and often leads to addiction, demonstrating that a high schooler’s “first time” may not be so harmless after all. Click on the link for more information.

It is universal that addiction is dangerous and causes severe consequences; yet, people still can’t resist the allure. The one question that is constantly within our minds is: why? The science of drug addiction revolves around the brain’s limbic system, more commonly known as the reward center. When one consumes drugs, such as opioids, caffeine, or alcohol, a neurotransmitter called dopamine is affected. The release of dopamine is responsible for the feeling of pleasure. That’s why people feel good whenever they eat or exercise. When taking drugs, the sense of pleasure is heightened, making the consumer crave more. Ironically, the drugs that increase dopamine levels are also what deplete it. Often, people who are addicted to drugs for long periods will not receive the pleasure they felt when they first took it. This is because the brain eventually develops a tolerance to the drugs and shuts down its dopamine receptors to limit the overload of dopamine coming in. As a result, many users increase their intake to try to achieve that same high they did at the beginning. The increase of doses usually continues and creates all sorts of health problems, such as memory loss and lung diseases.


Perhaps the current connotation that comes with drug addiction is completely flawed. The influential Rat Park experiment seems to imply so. In short, rats that were able to socialize, exercise, and mate were less likely to abuse a morphine solution than those that led an unhealthy lifestyle. The result of the study suggests the cause of addiction lies in psychological states and lifestyles, instead of the actual substance abused. This provides an explanation for a phenomenon that happened during the Vietnam War–the real life Rat Park experiment. Soldiers who abused steroids, painkillers, and other drugs were more likely to easily abandon their dependence back at home. Comparable to the rats which lacked healthy life circumstances, wartime servicemen were exposed to constant environmental stress, causing detriment to their psychological and emotional states; consequently, they became heavily addicted to drugs. However, when the war ended, the servicemen were sent back home where they were surrounded by family and friends. This significantly elevated their mental states, helping them leave their addictions in the past. By no means does this study imply that a particular individual will definitely be addicted or won’t be addicted to drugs. What this article offers is hope for those who are addicted. With the right help and support, those who are dependent on drugs can become sober. The magic is in knowing whom to turn to and what to do. A change in mindset and environment is a great supplement to first calling a professional or agency that has expertise in helping prevent addiction.


Stopping drug addiction is not as simple as taking away the drugs. Because the body and mind are accustomed to the constant high consumption of drugs to produce dopamine, the sudden removal of the drugs can cause terrible strains mentally and physically. Users can expect to feel depressed, anxious, and a loss of appetite within the first several hours of withdrawal. Further symptoms may also include sweating, muscle aches, vomiting, diarrhea, insomnia, and cramps. These symptoms can last from a couple days to weeks to months. The journey to recovery is already difficult, but it is even more difficult to go through alone, so individuals should never be afraid to call for help..