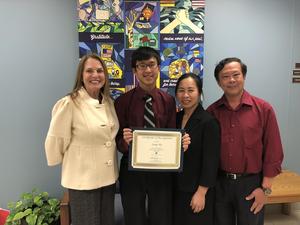 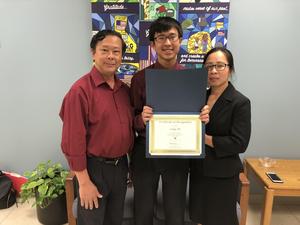 Recently, we were extremely proud to celebrate Bolsa Grande High School’s Class of 2018 Valedictorian at the GGUSD District School Board Meeting. Principal Louise Milner had these glowing words to say:

“Good evening President Harden, Members of the Board, Dr. Mafi, staff and community members. It is with great enthusiasm that I introduce Long Ho, Bolsa Grande High School’s Class of 2018 Valedictorian. Long is an exceptional individual who demonstrates outstanding leadership qualities, academics and community service. READ FULL TEXT----->
He has continually pursued challenging coursework by enrolling in Advanced Placement and Honors courses throughout his high school career, all while maintaining an impressive academic GPA of a 4.35. Long has been a recipient of Principal’s Honor Roll for three consecutive years, and in addition to successfully passing five Advanced Placement tests, was recognized as an “AP Scholar with Distinction.” One of Long’s most significant academic accomplishments of his high school career includes being distinguished as a “National Merit Scholarship Finalist.”
Additionally, Long is a member of the Interact Club where he has served locally in countless community events. He has been a member of National Honor Society for two years, and is also currently serving as Vice President of both the California Scholarship Federation (CSF) and Math Club - and is Treasurer of the Science, Technology, Engineering, and Math club.
The list of awards received by this young man is long and impressive. He is an award-winning member of the BGHS STEM Club; he was awarded 1st place in the regional Solo Math Prelims Award for two consecutive years and 2nd place in the Southern California Regional competition. As Captain of Academic Decathlon, Long has received multiple awards, including an astounding NINE individual metals and a team medal.
Long’s personal character is as impressive as his intellectual accomplishments. He is a delightful, charming, modest, mature young man who holds much promise and zeal for life - all remarkable attributes that will continue to serve him well in college and beyond. Long will be pursuing a major in the field of Computer Science at Princeton University where he will continue to do good works in the world. It is with great honor that I present to you Bolsa Grande High School Class of 2018 Valedictorian, Long Ho!